Smoke Patch PES 2019 Season 2021
Smoke patch version 19.3.0, new patch for pes 2019 season 2021. SP19 v3 is converted from SP21 V3, there are differences between the games so they would run without errors. Smoke patch is one of the best patches for PES 2019 game lovers. Please read the release notes before you install this patch. Be sure you have the latest version before reporting something.
Smoke Patch version 19.3.5 has repacked all previous updates and fixes and includes fixes for the reported issues with graphics or database.

Includes 20 teams instead of 21, the extra team moved to other teams Europe category

Two teams moved from the Belgium league to the Danish league for league stability and compatibility, if the number of teams in these leagues changes then the game would bug in football life modes.

The game cannot have more than 26 teams in the American League, this league contains 20 teams as maximum possible without errors, the other 6 teams are not present.

In pes 2021 this league is located in the main database of the game, in pes 2020 (and all previous versions) this league needs to be in a separated database level, this resulted in these teams missing some players especially players who play in a national team, meaning the players in these clubs that also play in a national team are not assigned to the club, this is to avoid duplications and bugs.

Serie B, LaLiga2, Brasileiro 2 and other missing teams:

These leagues and their teams are not present due to pes19 game limitation, other teams are also removed due to limited team slots, the players in the removed teams are available as free agents.
SP19 ADDONS COMPATIBILITY

All the sider sp19 addons can work with this version, except the addon (CL kitserver) that should be removed because it will make the kits old, this addon will need a new version. 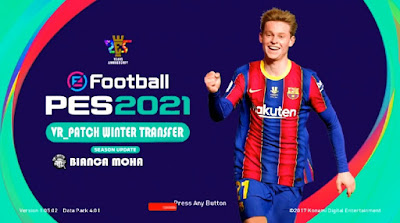